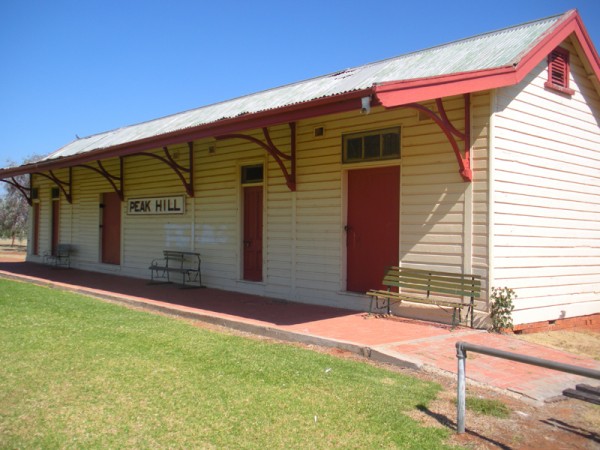 The benefits and advantages of the railway were not lost on Peak Hill's citizens, who sent a deputation to the government in 1899 for a rail connection to their town. Such a line would not only serve the community but also provide superior transport for the copper and gold mining operations at Peak Hill. Indeed, the mines at Peak Hill had their greatest production period from 1899 until 1919. There is never anything free of course-- tax-payers' money and much hard construction work went into building the railway. It was not easy to complete. However, its benefits upon completion were many and the community were delighted.

Exploration of a suitable route was undertaken in 1899 and again with greater zeal in 1906/1907. Prior to building the line, a temporary junction was laid at Narromine on 17 November 1908. Tenders for the track formation, were accepted on 5th May 1908 and for the buildings on 28th October of that year.

At Narromine, an engine shed with coal stage and water supply were provided on 2nd April 1911, for engines running on the Peak Hill extension. A carriage shed was opened at Narromine on the same date. The completed link to Parkes was soon to follow. The Parkes to Peak Hill line was authorised under parliamentary act in November 1911, and work started on the line's construction on 16th May 1912. The Public Works Department using day labour, undertook construction this time. The line was sufficiently advanced by 12th June 1914 for the Public Works Department to run a mixed train service conveying goods and passengers.

The line was officially opened on 30th September 1914. The slightly undulating country over which the line passed required numerous 1 in 100 grades in short lengths but nothing steeper. On the completed link, Parkes to Narromine is taken as the direction for down trains, and distance points on the line are measured from Parkes. In the steam days, a 60ft turntable was provided at Peak Hill, which had the only water facilities along the line, consisting of a tank with 8 inch jib on the main line plus a 12 inch column on the loop.

Sadly with the cessation of passenger travel the Peak Hill Railway building was set down for demolition. The people of Peak Hill fought to save the building and it was relocated to  Lindner Sports Oval in 1982 where it is now used by sporting enthusiasts as a change room and storage area.