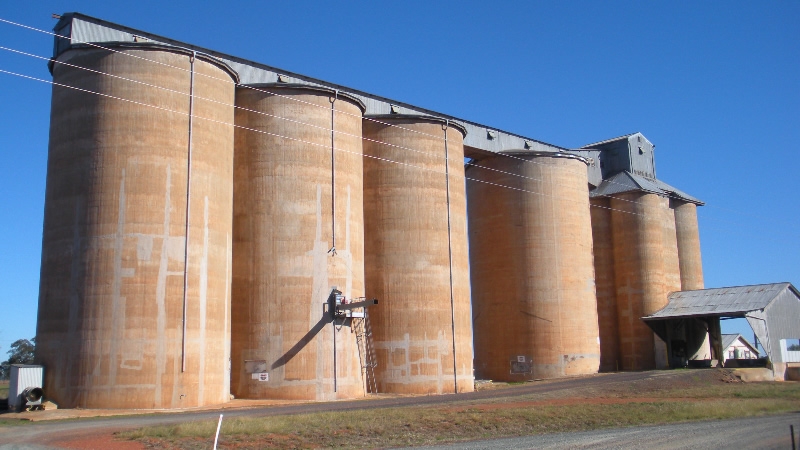 Peak Hill’s central Position in the New South Wales wheat belt may have been the reason why Peak Hill became the site for Australia's first upright bulk wheat silo in 1918, but there were many others under construction at different locations around this period. It was not until 1927 that the next stage, the six-bin silos and weighbridge complex, was completed at Peak Hill. In 1950 the construction of three additional 50,000 bushel bins was carried out and the bulkhead was completed in 1959.

Little wheat was delivered to Peak Hill's new silo in the first two years of operation, as 1918 and 1919 were very dry years, with only 14 and 12 inches of rain respectively. The silo filled for the first time in 1920 with a bumper year. The government paid a two shilling and six pence bonus on wheat in 1920, because of the shortage brought about by the drought. With this bonus, wheat that year was worth 7/6 bushel or one pound two shillings and sixpence per bag, certainly a lot of money in those days.

After viewing the current silo it will become apparent that they have grown substantially over the years to cope with the local grain production. Alot of locally grown grain is also taken over to the Parkes silo.

The Peak Hill silo can be viewed from Lindner Avenue, which runs parallel with the railway line.