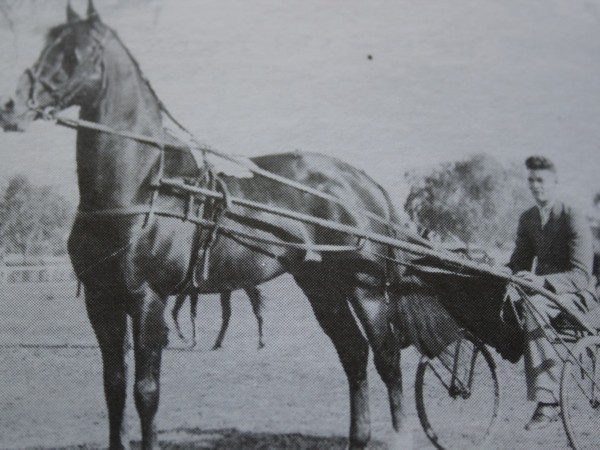 Harness racing was held at Peak Hill Showground.  Peak Hill still hosts many harness racing events.  It is said to have one of the largest trotting tracks in NSW.

The first trotting club was formed in May 1951 and the first meeting was held on 25th August, 1951.  Prize money per race was sixty pounds. A total of six races were run.

It is impossible to speak of Peak Hill without the name “Machine Brick” being mentioned; pictured here, and named after the first brick making machine in Parkes.

Machine Brick’s mother and another mare were exchanged for two bottles of whisky from a thirsty traveler in 1914 at Aubrey’s Baldry Hotel.

Machine Brick’s mother was fondly known as Gert and was joined with Rock Huon of Tomingly. From this union was born of placid nature a champion, who went on to establish a Harold Park 1 ½ mile record of 3.17.

Machine brick had a big impact on harness racing throughout Australia and New Zealand, a bloodline that produced many champions such as Paleface Adious.

Also synonymous with trotting is Rosewood Stud which at one time was the second largest breeder of standard/breds in Australia.
Peak Hill bred horses such as Barney Alto, King Auto, Peak’s Promise and Silver Peak to name a few, won many races.

Today we see the Peak Hill showground come alive on race days, with the colour and vibrancy of visitors attending from all over Australia.